Los Angeles, Calif. - October 8th, 2019 - Today is Microsoft's October 2019 Patch Tuesday. Microsoft introduces Windows 10 20H1 (also known as Windows 10 May 2020 Update version 2004) Insider Preview Build 18999 to Insiders in the Fast ring. It's noteworthy that this update unveils the Calls feature on Your Phone app. Now there are even more ways to stay connected to what matters. 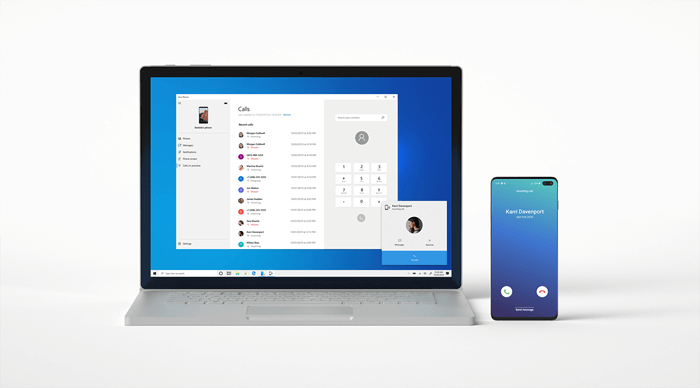 Microsoft first announced the Your Phone's Calls feature at the Samsung Unpacked event in August. Now it's available to Windows Insiders through this early preview build 18999.

With this new feature, you have no need to dig for your Android phone to answer your personal or work calls. You can now stay connected by simply answering (or not) your phone calls on your PC. Tap into your PC's speakers, microphone, and large screen for a richer calling experience.

With the Calls feature, you're able to:

Note: In certain instances, the Calls feature may require you to pair your mobile phone & PC again. If you have previously paired your devices, unpair your devices and go through the Calls set up flow again.

This feature will gradually roll out to Insiders on 19H1 builds or newer, so it may take a few days to be available inside the Your Phone app.

If you are Windows Insiders in the Fast ring, you can check out Windows 10 20H1 Preview Build 18999 through Windows Update now. But please note that it may contain bugs which might be painful for some. To get more information about Windows updates, please visit the Windows News section on this site.